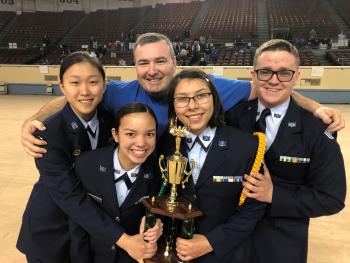 Nelson is one of 16 AFJROTC instructors to receive the accolade and the only instructor to receive the honor in Oklahoma, competing against 120 educators in the region. Headquarters for AFJROTC announced the winners on Facebook, saying the instructors recognized “represent the best of the best”.

“We are very proud of how far our EHS AFJROTC program has come in the last few years. Furthermore, we know that a lot of our success is due to our two fantastic instructors Colonel Lance Murray and Sergeant Michael Nelson.” said Dudley Darrow, EHS principal. “We could not be prouder of Mr. Nelson for earning this accolade, and we look forward to seeing him continue to contribute to our EHS AFJROTC’s future growth & success.”

Nelson has been with EHS since March of 2017 and has served as the aerospace science instructor at EHS with the AFJROTC since January 2018. He was also named the head EHS volleyball coach in February 2020. He is a retired Air Force veteran and has been instrumental in establishing a growing ROTC program at EHS.

Nelson expressed his heartfelt thanks after receiving the recognition.

“First, I would like to thank my wife, Lea and our two kids for supporting me in all that I do,” Nelson said. “Secondly, I am blessed to have the greatest group of JROTC Cadets in the world. I could not accept this honor today if it were not for who they are. Thanks to Enid Public Schools for all their support of our top-notch program.”

The AFJROTC has over 1,000 instructors across the nation working diligently to develop citizens of character devoted to serving their nation and community.